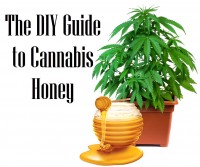 Cannabis honey is honey that is infused with marijuana and it is something that is often said to have been created for a very long time as there are claims which say ancient Egyptians used it in their rituals. However, it has become progressively popular as many cannabis chefs are whipping up several cannabis honey recipes to create sensations in the cannabis industry. It is often considered (though yet to be proven) that cannabis honey should have some beneficial properties because the components have individual health benefits. For example, honey contains compounds like carbohydrates, amino acids, proteins, vitamins, and minerals while the cannabinoids contained in cannabis such as THC and CBD are known to be beneficial to the treatment of chronic pains, epilepsy-related seizures, stress, and epilepsy.