34 Members of Congress are Fighting for the 250,000 Jobs the Cannabis Industry Creates in the US 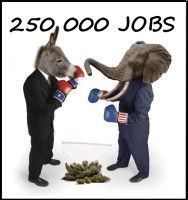 However – there are 34 bipartisan members that are trying to provide relief to an industry who has been plagued from overregulation since the day it became “pseudo-legal”. Of the members doing this include the likes of Katie Porter and Tulsi Gabbard, and Republican Matt Gaetz to name a few. The reason the cannabis industry has not been included is due to the current illegal status of the substance on a federal level. Thus – the federal government feels it is not obliged to help them out – despite that it rakes up billions in tax-revenue each year.

Kamala Harris Will Help With Cannabis…