FYI, Marijuana Isn’t Glamorous – No Sh!t, It is Not Suppose To Be! 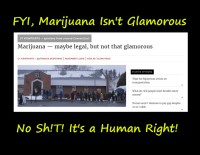 Right from this point we can realize that DeStefano suffers from a personal bias against cannabis users. It’s not entirely his fault either. For several decades, DeStefano and those of his age group have been taught that cannabis users are “dope fiends looking for their next fix”. According to their drug education, these “sex-starved-depraved-animals” would murder your grandmother for a piece of weed. Over the years, the image of the “stoner” transformed from a violent individual to a lethargic loser with semen crusted pants, living in their parent’s basement.

How to Cook a Whole Chicken in the Instant Pot

Will Cannabis Hurt or Help Democrats This November?

Canadian cannabis producer Aphria on what’s next after legalization | Extended…

Marijuana Stocks: Which Ones are the Best Buys?

Inside the College for Budding Weed…